We are happy to send you various items used in our practice, in gratitude for donations to The Korinji Foundation.

Omamori are traditional protective talismans offered by Buddhist temples to their supporters.

They are often inscribed with the bonji - Sanskrit mantric syllable - of a particular buddha, bodhisattva, or deity, and then empowered in a ritual during which the presence of that being is invoked. When hung in a home, vehicle, or place of work - or even carried daily - omamori serve not only to protect, but also to establish energetic connection with the temple and teacher.

This year, Korinji's omamori are connected to Marishiten, the guardian deity of our monastery. Marishiten is the god (or goddess) of the dawn, here shown in a wrathful aspect coursing through the sky astride a wild boar, wielding sword, fan, bow, and spear. Regarding Marishiten, in the Bussetsu Marishiten Kyo it is written:

‍Historically, Marishiten was much revered by the samurai. The mantra of Marishiten is used to remove all obstacles.

Each wood omamori is ~ 5" long, and burned with the bonji MA, Marishiten's seed syllable. The stamp below it is a design created by the Shugendo master Shokai Koshikidake for Korinji. Each omamori will be empowered by Meido Roshi, and sent out shortly after the lunar new year (end of January 2023).

Suggested donation: $40.00 each in USA includes shipping (international orders please inquire first, as shipping may be an additional charge).

Thank you so much for your support of Korinji! 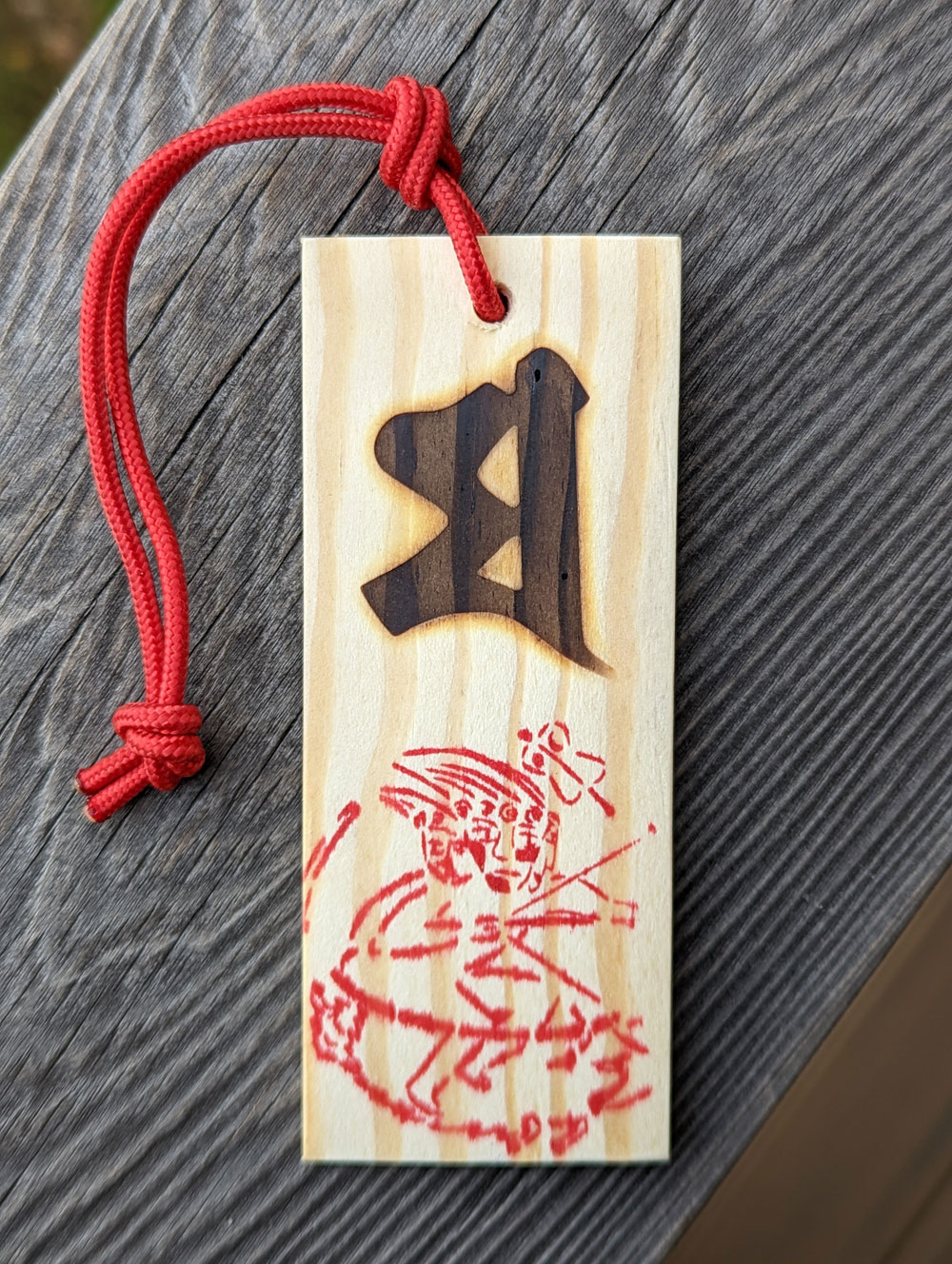 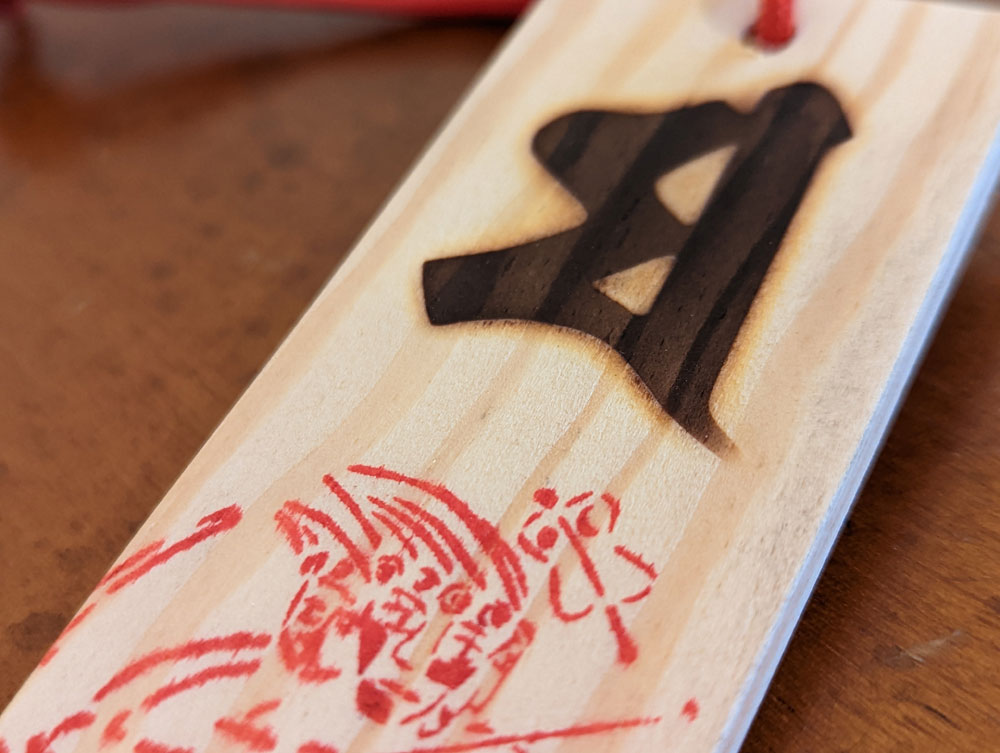 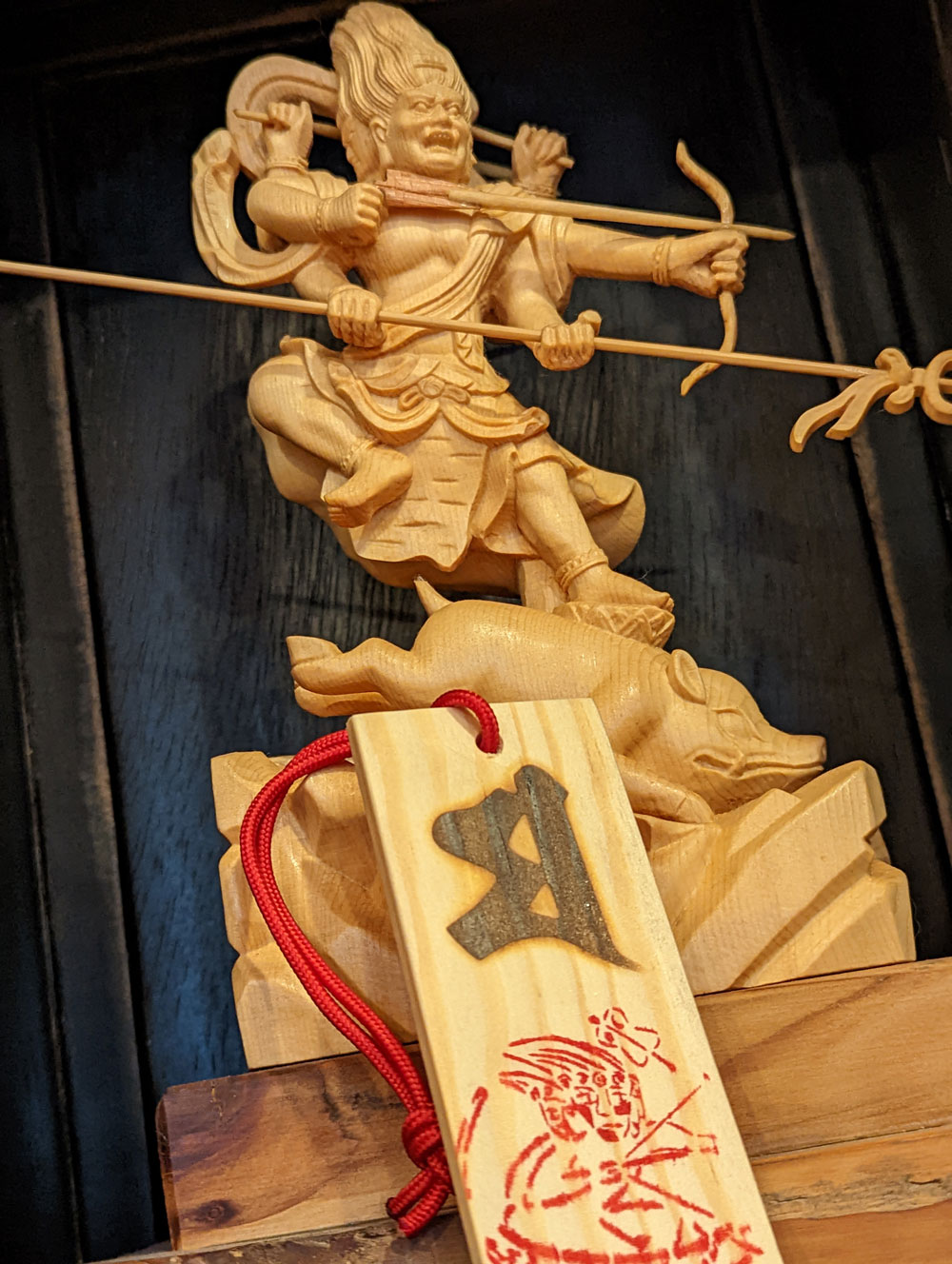 Calligraphy of the bonji - Sanskrit mantric seed syllables - of buddhas, bodhisattvas, and deities that are important in our practice. Each piece is brushed by Meido Roshi and then empowered by him in a ritual during which the mantra of the deity is recited. It should be noted that bonji consecrated in this manner are not considered mere symbols of a buddha or bodhisattva, but actual manifestations of those beings. As such, these calligraphies may be used in place of statues or other images on a Buddhist altar, and should in any case be treated respectfully.

Calligraphies are on heavy stock and stamped with Roshi's personal seal(s). Please see below for currently available pieces. Each is made to order, so images shown may not be the exact piece you will receive. Note that the size of the final piece can vary, so if you have a specific size you need please let us know; otherwise the artist will go with his inspiration. Most pieces shown are within a range of 12x12". If you wish to request a work featuring a specific deity's bonji or mantra that is not shown, please inquire.

NOTE: When ordering using the DONATE button, please be sure to share your correct mailing address, and to specify in the PayPal notes WHICH calligraphy you are requesting. 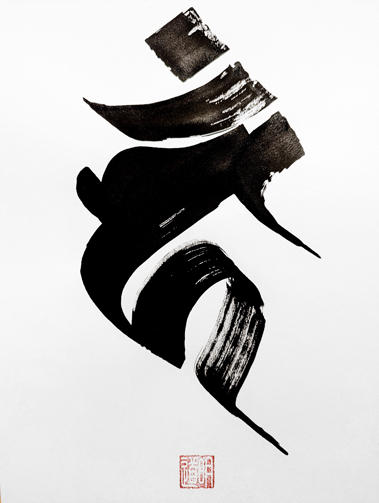 The mantric syllable kan. Fudo Myo-o (Acala Vidyaraja) is a wrathful deity who wields the sword of wisdom to cut delusion, and the sword of discipline to bind demons. The fiery energy of Fudo cuts through all obstacles. 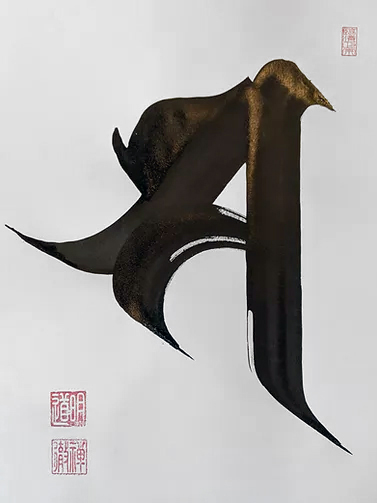 The mantric syllable sa. Kannon (Avalokitesvara) is the bodhisattva of compassion, who tirelessly responds to the cries of suffering beings. 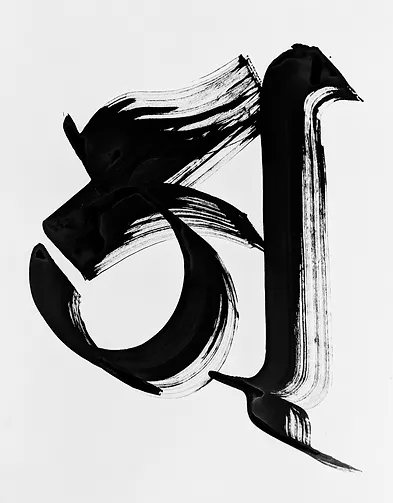 The mantric syllable A is the dharmakaya, the ultimate nature of all beings, represented by the figure of Dainichi Nyorai (Mahavairocana Buddha). This seed syllable is visualized in the practice of ajikan, a meditation method used in the Shingon, Tendai, and Shugendo traditions. 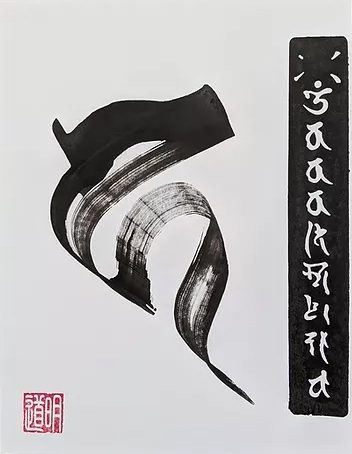 The mantric syllable ka is that of Jizo (Ksitigarbha). Jizo is revered as a bodhisattva that cares for beings in all the six realms; he has vowed not to attain buddhahood until the hellish realms in particular are emptied. He is especially beloved in Japan as protector of children as well as travelers. This piece additionally includes the mantra of Jizo, made with a wood temple stamp carved in the mid 1920's. 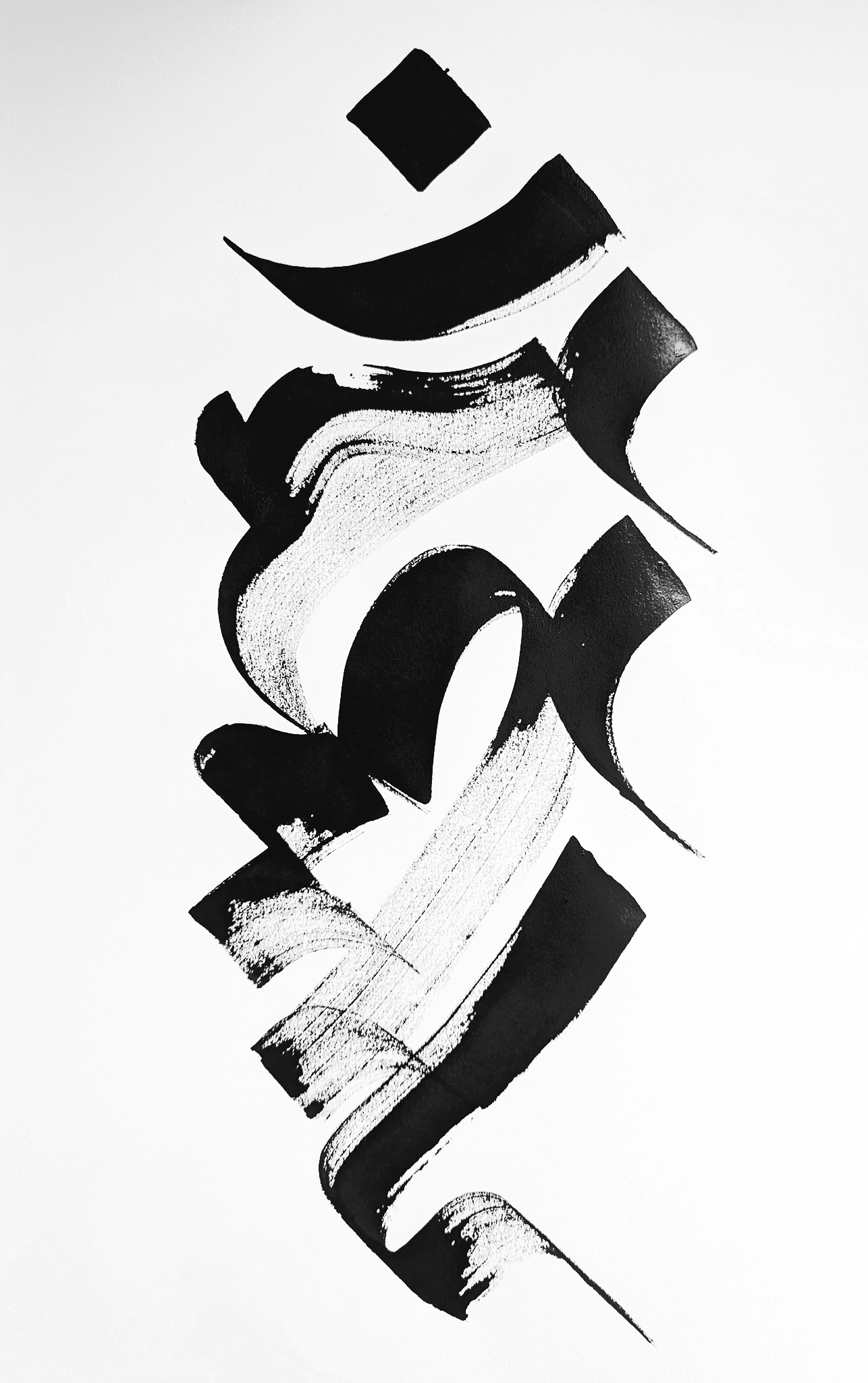 This is a longer bonji of Fudo than the one above; it contains the syllables kan and man that are found at the end of several Fudo mantras. Fudo Myo-o (Acala Vidyaraja) is a wrathful deity who wields the sword of wisdom to cut delusion, and the sword of discipline to bind demons. The fiery energy of Fudo cuts through all obstacles. 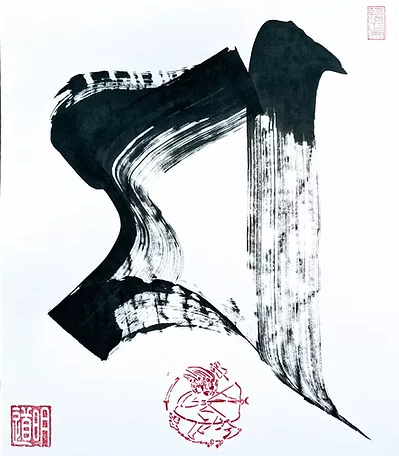 The mantric syllable ma is that of Marishiten, the guardian deity of Korinji. Much revered by the samurai, it is said that he (or sometimes, she) moves as fast as light and cannot be seen or traced by foes. She has the power to protect, confer prosperity, and cut through all obstacles. This calligraphy is stamped with a Marishiten design drawn for Korinji by Shokai Koshikidake, the Headmaster of the Mt. Koshikidake tradition of Shugendo. 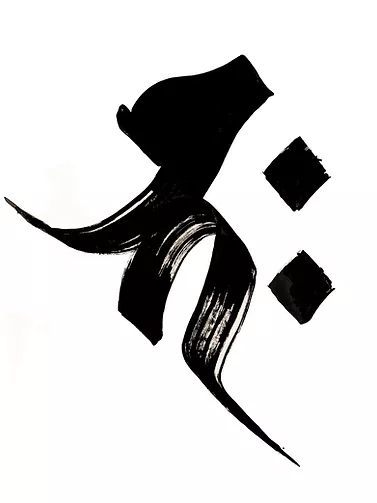 The mantric syllable ba is that of the historical Buddha, Siddhartha Gautama, called Sakyamuni. This calligraphy could hang behind a statue of the Buddha, or in fact could even serve in place of a statue on your altar. 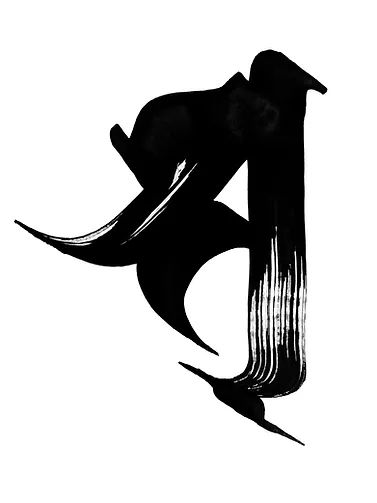 The mantric syllable so is that of the the goddess Benzaiten. The goddess of learning, music, the arts, and all things that flow, Benzaiten is invoked for knowledge and worldly success.

Meido Roshi can create larger calligraphies in custom sizes. The example shown here with the bonji of Fudo Myo-o is approximately one meter high, brushed on rice paper: the requested donation for a similar size piece is $400.

From the monastery forge: a copper pendant hot-stamped with the bonji (Sanskrit mantric seed syllable) of Fudo Myo-o.  can be worn on a cord as shown, put on a keychain, or just carried as aprotective talisman.

Each pendant is unique. They are hand-forged by Meido Roshi and then empowered by him in a ritual during which the mantra of Fudo is recited. 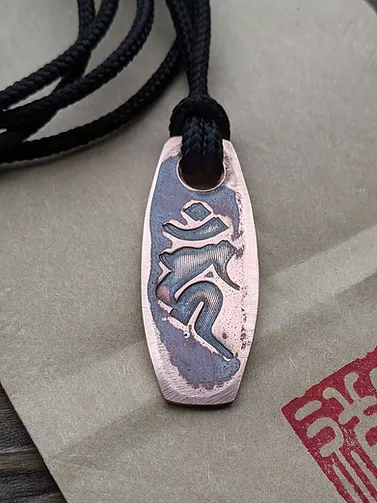